RunFree: The Greatest Adventure Race That Never Was.

Not ready to commit to a marathon or adventure race, but want all of the glory? Join RunFree 2014!

(Note: This is not something we would generally endorse, but our job is to inform you about the world of epic running) 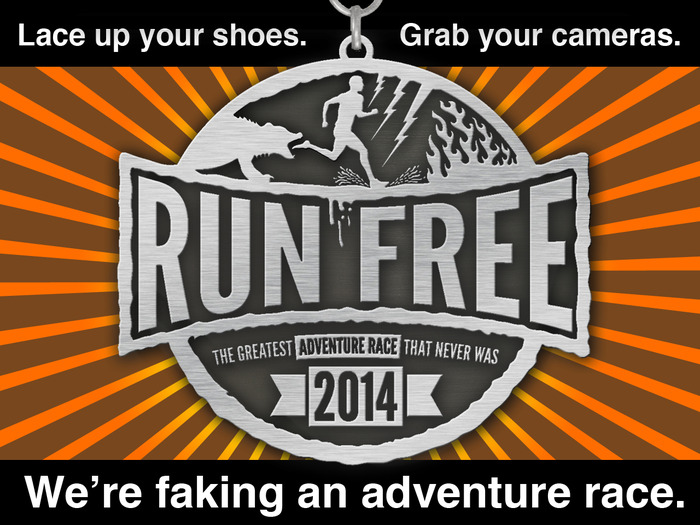 Last year we faked a marathon with over 1,000 people from 24 countries. This year, we’re faking the greatest adventure race of all time.

The long and short of RunFree is that people around the world can sign up at different levels on Kickstarter to receive a bib, shirt and/or medal and will take pictures of themselves completing “obstacles” and posting them online.

Last year during Run Free, we had over 1000 people participate. It was incredible. And the entire day consisted of people taking pictures, interacting with other “runners” online, and being inspired by those people to take even better pictures of their own.

From the simple idea of a fake marathon came bacon aid stations, superhero costumes, and all sorts of other hilarious things we never dreamed people would think of.

Last year, runners tagged their Instagram and Twitter pictures with #RunFreeRace to create the largest compilation of fake race pictures ever. The draw of RunFree is that you get all the glory of running a race without the actual work. RunFree is brought to you by Ridiculo.us – sign up on their site to get updates about RunFree 2014 and their other ridiculous projects.

Here are some of our favorite pictures from RunFree 2013:

We think it’s a pretty funny idea, although we prefer running the real races 🙂

What do you think about the concept of RunFree?